Our team of veterinarians and nurses are committed to providing the highest level of care to all the animals we see throughout each and every day. We are friendly and compassionate and pride ourselves on providing excellence in all aspects of our jobs. A diversity of professional backgrounds has enabled the development of a robust, progressive and dynamic team.

Anthony is one of the partners of the Berry Vet Clinic. He graduated from Sydney University in 2004 with First Class Honours and started working at Berry Vet Clinic, and has developed a particular interest in cattle medicine. He is an accredited examiner for cattle pregnancy testing, accredited to manage herds for ovine Brucellosis and is an AQIS accredited vet for live animal export.

He has a keen interest in small animal surgery, in particular orthopaedics. completing post-graduate courses in advanced knee reconstruction in 2014 and 2019 and performing over 50 successful TTA surgeries in our clinic. Anthony has undertaken advanced continuing education in equine medicine through the UK’s University of Liverpool, plus extensive equine dentistry training.

Anthony is an honorary vet at the Berry Show and works as a vet at the Sydney Royal Easter Show each year. He lives on the family farm on the outskirts of Berry with his dogs, Pride; a Ridgeback and Margot; a Doberman, and his ginger cat, Ninja. 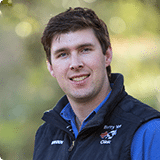 Bryden graduated in 2013 from Charles Sturt University, Wagga Wagga, then joined the team at Berry Vet Clinic and in 2018 became an equal partner.

He enjoys working with a variety of animals, in particular small animals and dairy cattle. He lives with his family on a local dairy farm, and in 2017-2018 completed the Dairy Australia Countdown training to further his skills in milk quality and farm management. He has pursued continuing education through the University of Melbourne in small animal dentistry, is completing an animal behaviour course, and will soon be commencing a Masters of Small Animal Medicine.

Bryden is a devout family man, if he isn’t at work, he is with his wife Sarah, daughters Mckenna and Lacey and their pets – Rhodesian Ridgeback, Nyota, Fair Dinkum Vegemite and Crikey Dingo Marmalade the two shed cats, as well as a collection of rabbits;, Buttermilk, Flopsy, Mopsy, Cottontails and Peter.

Trish grew up on a dairy farm in Kyabram, Victoria but is our Gerringong local. She has a soft spot for working dogs Braidy is currently living in Ulladulla but grew up in Sydney. She completed her certificate IV in veterinary nursing in 2017.

Dive straight into the feedback!Login below and you can start commenting using your own user instantly